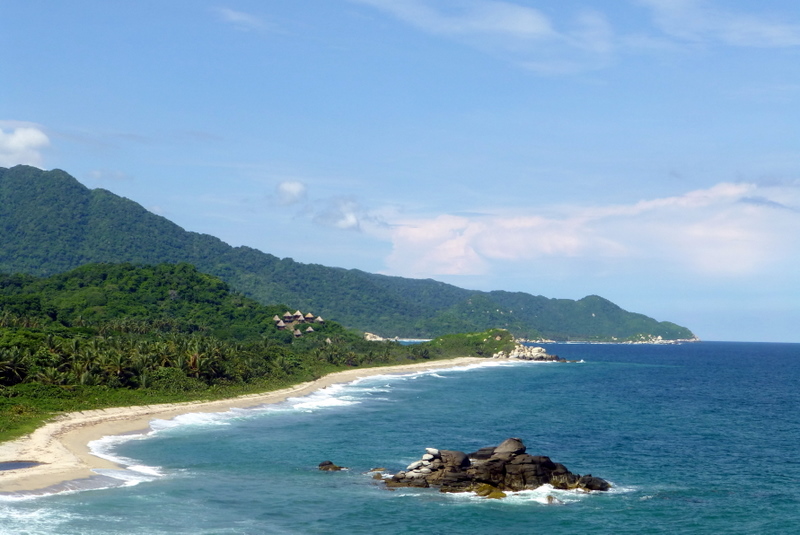 Colombia is the size of California and Texas (or France, Portugal and Spain) and is very diverse comprising both wet and dry tropical forests, tropical and mountain grasslands, jungles/rainforests as well as deserts – entailing a vast diversity of animals, birds and plants. Besides the long coastline facing both the Pacific and Caribbean, there are countless mountain ranges (highest 5,775 metres) and valleys, grasslands especially around the vast Orinoco River, and rainforest/jungle in the Amazon basin. Despite establishing many national parks the country still faces a huge environmental challenge as exploitation of natural resources is vast and growing (giant plantations, mining, logging, oil exploration.

With this diversity my opportunities are endless though having experienced most of these options in other South American countries, I'll just pick what feels best in the moment though always taking the weeather into consideration. Also I will strive to slow down and spent more time in less places - years ago I used to move along to experience as much as possible, but now I have lots of time and many experiences are with the people I meet.

A history update. The first people arrived in Colombia 12-20,000 years ago – most of them passed by but some decided to settle. Compared to neighbouring countries very few things were built and remain from the Pre-Colombian area, thus knowledge about these people is limited. When the Spanish arrived in the 1500th century the indigenous people were farmers, fishermen and traders and since the settlements were scatttered around the country there was little competion and little reason to fight. Despite being named after Columbus, he never visited the colony that was first discovered by Alonso de Ojeda in 1499. However, the Spaniards didn't settle until 1525 in Santa Marta and 8 years later in nearby Cartagena established because of it's better harbour. The rest of the colony was conquered during the 1530s and in 1550 it was brought under the control of the viceroyalty of Peru.

In 1564 a new authority and more independent authority was establised comprising most of today's Panama, Colombia and Venezuela - in 1717 Equador was included and Bogota made capital. The population initially comprised the indigenous people and the invaders but during the 16th and 17th centuries the Spaniards brought in so many African slaves that they outnumbered the indigenous people. The first rebellion against the Spaniards took place in 1781 – the Spaniards regained control but during the following decades more and more towns declared independence and in 1812 the liberator Simon Bolivar won 6 battles against the Spaniards.After regaining its throne from France/Napoleon they Spaniards reconquered the country in 1817 only to lose it to Bolivar in 1819 where an independent republic was established. After Bolivar's rule ended in 1830 two strongly opposing groups appeared – Conservative (centralists) and Liberals (federalists) and during the last half of the century fierce rivalry lead to countless insurrections and 8 civil wars. The conservatives won the final war in 1899 leaving 100,000 dead and in 1903 the USA took advantage of the weak republic and conquered Panama (then still a Colombian province) to gain control of the canal.

In the beginning of the 20th century the country prospered from coffee and bananas and infrastucture was improved. However, as everywhere else in the world the 1930s were hard and in 1946 another war between the two fractions led to more than 200,000 dead. Following a presidential assassination and a coup the 2 parties made peace in 1957 sharing power and prohibiting all other political activity. However, huge poverty in the countryside entailed communist enclaves and when they were bombed in 1964 FARC was established and grew constantly during the next decades especially after president Betancour negotiated peace with them in the 1980s. The 1980s was also the time when cocaine boomed making the Medellin cartel leader Pablo Escobar one of the world's wealthiest men with an estimated worth of USD 20 billions. The drug war heated up in 1989-90 before most cartel bosses including Escobar surrendered – though the drug trade never slowerd as others took over.

After the collapse of communism FARC went into kidnapping making USD 200 millions a year while paramilitary groups - previously aligned with rich landowners - aligned themselves with drug cartels pursuing the guerillas. In 2002 the country elected hardliner Uribe to president making significant progress in the country's safety but also facing a scandal of falsely accusing and killing thousands of opponents. Since 2010 the election of president Santos things have been fairly calm though only time can tell Colombia's future – many things still smolder under the surface....