I have travelled extensively around the world since I was a child. In the 1970-80's it was primarily Western Europe (a few times in Eastern Europe) with my parents, my soccer team, my school classes and with friends. When I was 15 a trip to Crete in Greece convinced me that I'm not a charter tourist. Like most European teenagers my age, my first trip without adults was interrailing around Europe with some friends. At this time travelling was mostly for fun, though I found the history of particularly Italy and Greece interesting and also I was curiously observing differences in cultures, traditions, etc. from a distance.

In the 90's I started backpacking to different continents (North America and Asia) with friends, my girlfriend and for the first time I also travelled for a long time by myself – a trip of 4 months to South East Asia. I think this trip changed a lot in me and for my later travelling. Suddenly I could (but also had to) make all the decisions myself and I met a lot of people that I would not have met travelling with friends – it also made me independent and taught me the advantage of travelling spontaneously in stead of planning everything in advance. On the other hand there was nobody to share experiences and challenges with and a few times it was a bit lonely. My outcome of travelling also started changing; from observing I got intrigued by the differences in cultures and traditions, thinking these foreign people were strange in many ways – and often I was frustrated particularly with our different perceptions of time – e.g. when using local transport where they often told me they'll leave in 5 minutes but they didn't leave until the bus/truck was full. I also noticed that speaking a bit of the local language could get me a lot closer to the locals - both mutual understanding but also getting help.

In the new millennium I continued travelling to continents already visited but also new continents – Oceania, Africa, South America and Antarctica. At home I was in a process of personal development towards greater enlightenment and understanding of myself and other people and this was intensified by my increasing reflections on experiences with different cultures – why are we different and how does this affect my perception of myself and the world e.g. regarding values, time/patience, understanding/empathy, lifestyle, freedom, etc. In this process I learned the important lesson that we judge other people and cultures based on our own values, social norms and view of the world - and for that reason we always believe others to be inferior. The process also helped me past my impatience (and other ignorant habits) realising that the only person suffering was me – today I embrace waiting time as a moment to relax and as an opportunity to observe and talk to the locals.

At New Year 2007/08 I quit working and backpacked around the world for 1 year with my girlfriend at the time – a fantastic trip to destinations most people only dream of going (see description under Jordomrejse 2008-09 - text only in Danish). When we returned to Denmark I got some great job offers but always similar to what I did before (chief financial officer). But as I was getting more interested in people than finance/economy, it never felt entirely right, and I decided to start looking for a new purpose in life amongst other studying psychology and doing voluntary work. For various reasons neither was possible, so I decided to travel full time in the hope of finding something interesting on the road. I still haven't found it, but as personal development is high on my current agenda, I still get a lot from travelling, meeting countless warm and welcoming people everywhere.

In 2010 - after decades of backpacking - I decided it was time to change the way I travel. I have always loved bicycling, so it was obvious to combine it with travelling and try long distance bicycling. My first trip was 6 weeks and 4,500k from Vilnius in Lithuania back to Denmark through the Baltic countries, Finland and Sweden. A very different experience because I spent 80-90% of the time transporting myself between 2 destinations contrary to backpacking where transport is only 10-20%. It also entailed meeting very different people than I otherwise would have met because the bicycle is slow and most people are intrigued by long distance bicyclists – and then people in the countryside are easier to meet and in general more relaxed and hospitable than people in cities. In 2011 I did my second trip; 2 months and 8,500k through 14 Balkan and neighbouring countries - it was an even better experience because of the warmth and hospitality of the people who all went out of their way to help me. And finally in 2012 I did my third trip, 5 weeks and 4,000k around Ireland and Great Britain – the weather was terrible but again very nice people.

See selected travel descriptions from previous trips - only in Danish.

One thing in particular has changed the outcome of my trips (and me as a person) tremendously. I used to be quite paranoid when travelling and while this is good for safety and security reasons (I never had a bad experience or had stuff stolen), it did limit my options of meeting interesting and helpful local people, which these days more often have become the highlights of my trips. Where I come from we are vary of strangers, so it was (and still is) overwhelming to meet people who have very little insisting on sharing everything with me – I had to learn to receive the unconditional hospitality and friendship of strangers and being rejected by these proud people when offering to chip in…

For this reason I now especially enjoy travelling in so-called “developing or third world countries” because people here prioritise people, spiritual contemplation and living in the moment as well being very open-minded and interested in strangers with whom they share the little they have. And by living in the moment these people in general seem happier than people in the so-called “developed world” where career and material wealth (at least on paper) are synonymous with success and happiness. However, a lot of people here work too much, have lifestyle diseases and/or stress and there is a tendency of living either in the past (affected by bad experiences/traumas or recollections of better times) or in the future (fears/concerns or dreams/hopes of a better life). And maybe worst of all we are very spoiled but we neither know nor appreciate it.

In many ways I was also like this - especially being a workaholic - until I realised that life is too short for that. I have always loved working and most often considered it as interesting as a hobby, but now I feel I have tried it, and there must be more to my life. The question is what? – and that is what I hope this trip will help me find out – my new purpose in life.

Countries travelled (before this trip)

When I was younger I decided to always have travelled as many countries as my age - not for the passport stamps but as a reminder to continue getting new travelling experiences. Today the number of countries doesn't matter, but I still have a desire to visit new countries and new regions in countries already visited.

Depending on who you ask, there are different ways of defining countries (UN, FIFA, etc.), so I can't give an exact number of the countries I have travelled before this trip – however, whatever method used it is around 100 countries.

See selected travel descriptions from previous trips - only in Danish. 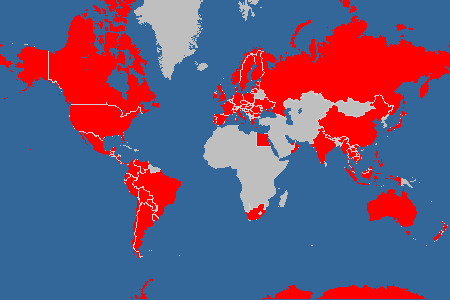 See selected travel descriptions from previous trips - only in Danish